Our last day in London found us re-visiting the V&A and investigating the 4th floor where it is simply described as Britain 1760-1900. In these galleries you will find an exhibit that features objects and drawings illustrating aspects of early British design education.

Many students of Art and design do not realise that the process they partake in during the course of their degree stems from ideas about art education developed in the 19th century. One of those precedents is the South Kensington System which was a state run syllabus that was delivered in institutions across the UK. From the 1880s the syllabus was administered and examined by the South Kensington School, what is now the V&A.

How did the South Kensington System come about?

Well … it has more to do with manufacturing and industry than people realise. Problems Started to be raised as early as  early as  1820 with imported goods gaining more of the market becasue they were better designed than the British counterparts. To counter this manufacturers started to employ foreign designers but this was not a long term solution as a better arts and design education system was needed. At the time the Royal Academy of Arts was the main institution for arts education but it had become a tight knit, unchanging, inflexible, elite group of men who controlled the gates of the profession vigorously. Following the Great Exhibition of 1851 where British design was percieved to be inadequate and following a Parliamentary inquiry into the state of Art Education the South Kensington System was established. 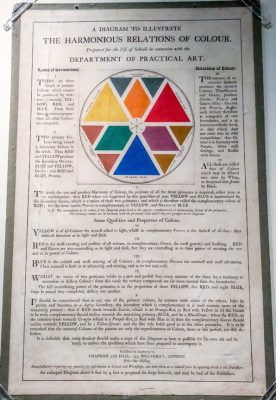 This “Diagram showing the harmonious relationships of colour” was used as a teaching aid in about 1853. Today the colours look quite muted but it aims to illustrate what colours would go together. It was accompanied by The Elementary Manual of Colour written by Richard Redgave who drew up the first curriculum of the National Schools of Art when they were established. (Click on the image to see a larger version)

The Internet Archive has a copy of the Manual of design: compiled from the writings and addresses of Richard Redgrave for free download

This design for a ceramic tile won a scholarship prize for Kate Greenaway who became famous for her illustrations for children’s books. The National Competition provided funds for 15 students to study at the National Art Training School at South Kensington.
Image © Victoria and Albert Museum, London 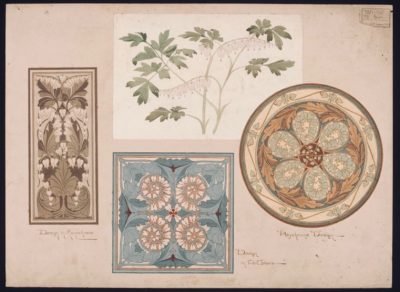 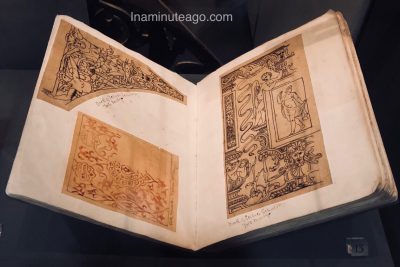 This student sketchbook of W.S. Singer would be called a studio or visual journal today. It Shows tracings of drawings made in the museum. Singer went on to become a designer of church furnishings. 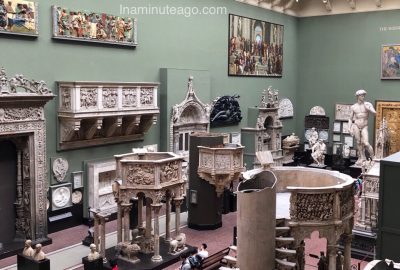 Another section of the museum which directly relates to learning to draw is the cast galleries. At the moment only one is open as they renovate the other. The Cast collection opened in 1873. The aim of the collection was educational as the idea was that art students would learn to draw by studying the copies of significant art works that were cast. The cast galleries reproductions of Michelangelo’s David, Trajan’s Column, and Ghiberti’s Gates of Paradise, amongst many others. 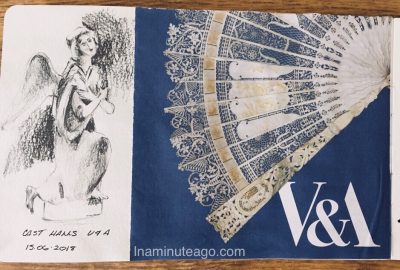 Of course in the tradition of the V&A I had to do a sketch in the cast gallery. This is my travel sketchbook page

John Ruskin, did not like the South Kensington system as he believed this copying and tracing stifled imagination and he started The Ruskin School of Drawing in 1871 but that is another story

Enjoy this? Please subscribe
Have Inaminuteago delivered to your inbox by using the ‘follow’ feature in the sidebar. If you are on a mobile or tablet you will need to scroll to the bottom to find the ‘follow’ feature. Just enter your email address, and when you get the confirmation email make sure you say yes and you are all set!