When Austrian painter Egon Schiele died at 28, he left behind 3,000 drawings and more than 300 paintings. Schiele has been described as major figurative painter of the early 20th century but that is not what I shall talk about today. After my attempts at doing the the #OneWeek100People2018 challenge I have been thinking a lot about sketching people and about sketches of people I have seen that really moved me. I thought today I would share a sketch that rocked me to the core. 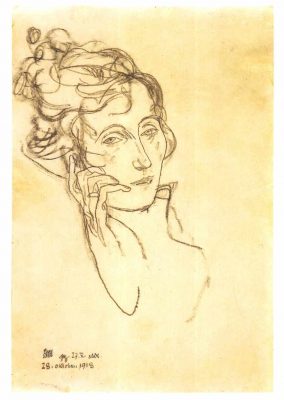 I saw this image at the National Gallery, London in 2013 at an exhibition titled Facing the Modern: The Portrait in Vienna 1900. I was tired, very tired as we had been on our feet doing tourist things all day when I looked up and saw it. She looked tired like I felt! So I crossed the room to take a closer look. I read the title Edith Schiele on her deathbed. Well, I thought I am better off than she is. Then I read the little information blurb about the image. I discovered Egon Schiele had sketched his wife Edith who was 6 months pregnant. She died of Spanish flu not long after this sketch was made. Three days later he died. When I read this I nearly broke out in tears and had to move away from that room in the gallery. This deeply moving sketch has lived with me ever since. It is a poignant sketch for sure but I have often wondered at those eyes knowing they would soon loose all vitality.