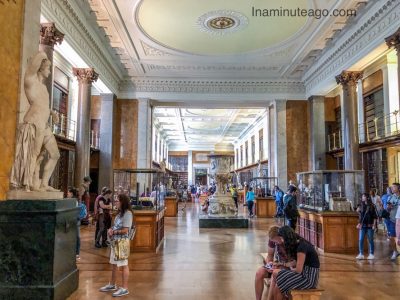 Recently I had the pleasure of sketching with friends at the British Museum. It was a wonderful morning with our sketches in what is known as the Enlightenment room. The following day we returned as the exhibit had me intrigued and I wanted a quiet look at it – I am pleased I did, as the room kept me busy for 3 hours!

The Enlightenment room at first glance looks very old fashioned. That is because it recreates, how collections were presented to the public during the Enlightenment. It houses a permanent exhibition of thousands of objects that demonstrate how people understood the world during period. Between 2000 and 2003 the room formerly known as the King’s Library was restored to its previous glory.

During The Enlightenment people believed that observing and studying both the man made an natural world was the way to understand the world. This philosophy flourished from about 1680 to 1820. Through objects in this room and the room itself we are given an insight into how collectors, antiquaries and travelers viewed and classified objects from the world around them. 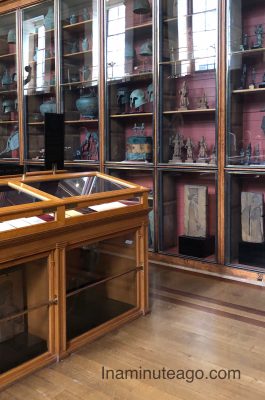 Note the word travelers because it was the Age of discovery that caught my imagination. Of course being an Australian when I noticed how Captain James Cook and Sir Joseph Banks had added to the collection I was immediately curious and sticking my nose in here and there and everywhere!

The Enlightenment room is divided into 7 themes which lead to new disciplines of knowledge being established. They are: Religion and ritual, Trade and discovery, The birth of archaeology, Art and civilisation, Classifying the world, Ancient scripts, and the natural world. Honestly the ideas that these areas of the room introduce kept me busy for hours and now have me poking around doing more reading and no doubt even more reading when I get back to Australia.

The first thing that caught my imagination was the connection with travel. Often Collectors purchased objects to add to their collection when they were on the Grand Tour. The Grand Tour is not a TV program but a sort of, 17th and 18th century right of passage that the well off upper class young men and in some cases women did. They travelled to Europe including places like Rome Greece to expose them to the wonders of antiquity. It was a way finishing off their education and instilling in the next generation what it was to be educated and of a particular class.

As I walked around of course I gawked at some of the books in the cabinets and many were tales of travel and it occurred to me that this era travel writing was a booming genre. Of course there were travel books written before this period but as a genre you could see how it really established itself. 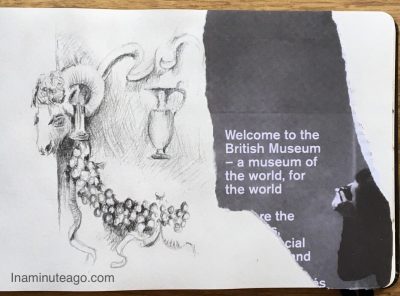 I was fascinated with their section on the Birth of Archaeology, and of course  what was called Art and civilisation. The notion that there is high art and that there is ‘progress’ in art came from this period. What do I mean by progress? It was thought that human kind (actually in this era they always spoke about mankind) progressed from ‘primitive’ beginnings in early human habitation  to develop over time into what they considered was the height of artistic achievement, found in classical Greek sculpture and architecture. Of course we do not hold these ideas any more but occasionally I encounter vestiges of this thinking today

Anyway in the tradition of the grand tour I did another little sketch and enjoyed my visit to the Enlightenment Room very much. (Click on the sketch for a larger view )

Photo Credit for the first photo is thanks to Jerry Everard of The Fogwatch.com