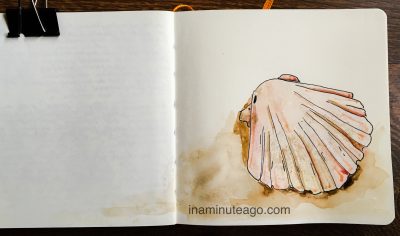 I am not sure what I feel about omens as sometimes they sound like new age clap trap but I did pause to think about the person who carried this shell on a pilgrimage.

This shell dated at 1200 AD was found in the old city at Bristol. Now, the interesting thing about this shell is that this type of shell is not found in British waters. The scallop shell is the symbol of St James and worn by pilgrims as a sort of badge while walking the Santiago de Compestela in Spain. In times past it was believed to keep pilgrims safe and it was also handy to scoop water from streams and drinking fountains along the way. The shells have 2 holes drilled in them and are stung with leather. This enables them to be worn on belt or around the neck. The tradition is still alive as these days pilgrims still carry a shell but tie them to their back packs.

As regular readers know I am slowly heading towards France where Jerry and I are going to walk the Camino de Santiago. This pilgrimage is a 500 mile (800 Kilometres) from St Jean Pied-de-Port in France to Santiago in Spain. It will probably take us about 5-6 weeks to walk it but this shell was found in Bristol so who ever carried it to Santiago and back had a much longer than we do!

Needless to say I had to add a quick sketch to my travel journal. I used aquarel pencils, watercolour, pitt pens in a hand book journal which is 5 inches by 5 inches. The buff colored paper is about 140 gsm and takes a light wash. 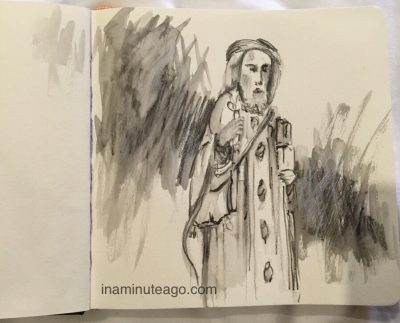 Yesterday we went to the V&A and who should I bump into but a small statue of St James dressed as a pilgrim. Well… Not literally bump as I am careful in a museum. It was found in the Midlands in England, dated 1400-1500. Made off alabaster this figure was probably used for personal devotion.

Once again it seamed appropriate to attempt a small sketch in my travel journal. It was done using graphite a aquarell pencils and I added a light wash of water when I was back at the hotel.

Sometimes stories unfold themselves in a journal. They can appear to be over a couple of days or couple of weeks. It is fun and interesting to watch for and pick up the threads of various stories as they interweave themselves into my life. So I don’t see omens but I do see stories.