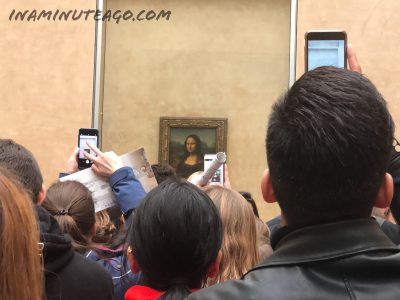 We paid a visit to the Louvre today and of course braved the crowds in the room that houses the Mona Lisa. For many people seeing this painting is a bucket list item but when they get to see it you can tell they are slightly disappointed. Not every one of course but you can sense they walk out wondering why is Leonardo Da Vinci’s Mona Lisa considered to be one of the greatest portraits of all time? It is a global icon with rock star status that has been endlessly studied, copied, and parodied. But when many people see this small 30 x 21 inch (76.8 × 53 cm) painting, you can see their unspoken question: ‘Why the fame?’ As with most answers in Art History and life for that matter – it’s complicated.

If I had to summarise, I would say it was painted by a man who has celebrity status – Leonardo da Vinci and the painting itself has a great backstory. For much of the Mona Lisa’s history, the woman it represented was unknown, as people did not know why it was painted or whose portrait it was. Mystery also surrounds her enigmatic smile.

The Mona Lisa was stolen, owned by the rich and famous (French Kings and Napoleon), housed in palaces (Versailles), and brushed shoulders with famous creatives Duchamp, Apollinaire and Picasso. At one stage some historians thought the Mona Lisa was a self-portrait – in other words, a cross-dressed ‘selfie’ of a very famous man. Although few now believe this theory, it is still part of the backstory. Also it is a technically interesting painting because Leonardo developed a new style of portrait painting, in which he used a technique called sfumato masterfully. All of this has made the painting legendary but let’s unpack some of these stories. 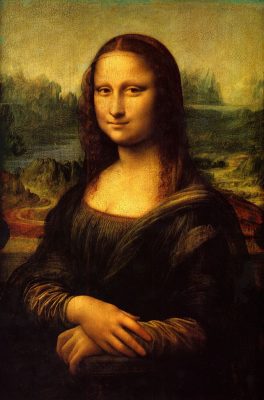 The woman is thought to be Lisa Gherardini, wife of a Florentine silk merchant Francesco del Giocondo – hence the alternative title, La Gioconda. When Leonardo Da Vinci painted Lisa Gherardini he developed a new type of portrait. It was started in 1503 and Leonardo worked on it at various times for the rest of life. It is the earliest Italian half-length portrait to focus closely on the psychology of the sitter.

To show this more easily, I have dug out some portraits of women from around the same time that demonstrate the genre. Many portraits of women at that time were formal side views. Of course, there are exceptions, and the discipline of Art History relishes those, but generally, when someone commissioned a portrait of their wife or daughter they expected a formal side pose such as this “Portrait of a young woman” created by Piero del Pollaiuolo in Florence around 1470. I always enjoy these portraits for the hair styling but that is another topic. 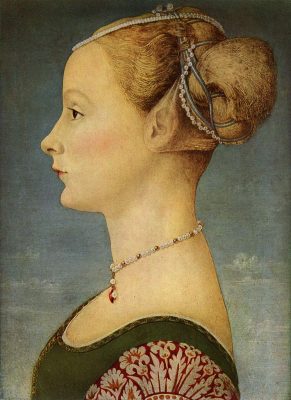 Here is another famous Portrait of a Young Woman painted this time by Sandro Botticelli. This portrait was executed between 1480 and 1485 and is often used in Art History lectures as an example to illustrate an ideal beauty of the time. Simonetta Cattaneo de Candia Vespucci, nicknamed la Bella Simonetta, was known for being a great beauty of her age. She was the wife of Marco Vespucci of Florence. 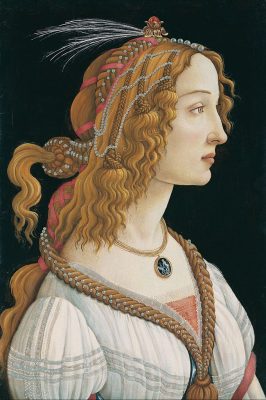 Portraits of the time were usually formal and with serious expressions. It is as if Leonardo looked at the genre of portrait painting and what was expected, and asked himself what portraiture was all about? Then he decided it was about the person, rather than the expectations of the patron or fitting in with what was accepted in the genre. With that, he set about representing the person.

The pose of the Mona Lisa feels more casual. The figure is sitting in one direction and partially turned towards the viewer, with her hands crossed in front of her. This is a bit unusual because although Hans Memling had represented women with hands joined across the body, it was not done often. Since the figure is partly turned towards the viewer, her spine is turned. This spinal twist makes you feel as if she has just turned her head to you. It is a far more dynamic and alive pose.

For the modern viewer, the famous enigmatic smile often engages us and makes us curious to know more about the painting. It is an engaging smile and important too. Mona Lisa: The History of the World’s Most Famous Painting points out that usually women in Renaissance paintings were depicted as serious, so it is quite rare for women to be shown smiling. But it is not only that the Mona Lisa is smiling, but how Leonardo da Vinci created that smile is interesting.

Leonardo da Vinci was known as a prominent master of a technique called Sfumato. It blended colour in a manner that looks natural. Sfumato is an Italian word that derives from ‘sfumare’, which means to “to tone down” or “to evaporate like smoke”. I think today, we would call it a type of lost-edge technique. If you have done any painting workshops or even watched YouTube demonstrations and lessons, you may have come across a teacher talking about lost edges or disappearing edges. This comes from Leonardo da Vinci’s Sfumato technique. With it, he was able to depict subtle shifts of form and apply it to a human smile.

The Mona Lisa was said to be da Vinci’s favourite painting as he carried it around with him most of his life and continued to work it. He never declared it finished. In 1517, da Vinci went to France at the King’s invitation and took the painting with him, and on his death two years later, his assistant Salaì inherited the work and sold it to France’s King Francis I. The Mona Lisa was kept at the Palace at Fontainebleau. King Louis XIV moved the painting to the Palace of Versailles, then after the French Revolution, it was moved to the Louvre. There was a 4-year block of time where Napoleon hung the painting in his bedroom in the Tuileries Palace.

So that is the painting itself. It was appreciated as a great painting but as Donald Sassoon traces in his book “Mona Lisa: The History of the World’s Most Famous Painting” the painting really became famous in the twentieth century.

In the middle of the 19th century, the idea of the femme fatale developed. Today we would call a femme fatale a ‘man-eater’, as she is supposed to be a mysterious sexy woman who uses her charms to ensnare and manipulate men, so much so, that it causes their downfall. Anyway, the French intelligentsia decided that the Mona Lisa was represented an example of a femme fatal. It was at this stage that The Mona Lisa started to become a woman of fantasy, rather than a woman represented in history.

The painting was stolen in 1911 by an Italian carpenter who was working at Musée du Louvre. The newspapers picked up the story and, since it was the only painting to be stolen from the museum and was missing for two years, the story grew. The intervening manhunt added to the story of the painting. During the investigation to recover the painting Guillaume Apollinaire and Pablo Picasso, were accused of robbery. The thief later admitted he stole the painting to reclaim it for Italian culture. So now the story of the Mona Lisa has a political element too.

After the painting was recovered, it was insured by the Louvre for a fabulous amount making it literally the most expensive painting on the planet so the Mono Lisa became newsworthy again.

Marcel Duchamp a Dadaist mocked the idea of high art by adding a moustache and beard to the portrait. But the painting must have been very well known by then, as in order to make his point, he had to choose something reasonably well known otherwise his message would not work. It has since become one of the most parodied works of art in the world. Just think of all those internet memes of the Mona Lisa doing odd things.

With the development of merchandising, the Mona Lisa became even more popular. The advertising industry effectively turned the painting into a brand, especially after 1980. International advertising agencies linked various products with the painting, and in doing so, they tried to infer that their product was linked to fine art and the associated value system of quality. You could say they were linking their products to the finer things in life. In so doing, they also promoted the image of the Mona Lisa as a work of Art of great value.

There are many other stories about the painting that involve secret codes, hidden messages and mysterious meanings. It is a highly talked about painting and the mix of all these stories and puzzles, taken together, has worked to construct the Mona Lisa into a world icon. The Mona Lisa is literally famous for being famous. Of course, that fame is based on something, as the hype cannot stick if it was a meaningless painting, and people hope to see what the fame is based on. To my mind, that is why people visit the Louvre with the express purpose of seeing the painting they hope in their own way to make sense of the painting. It is a bit amusing to see crowds of people walk past four other Leonardo da Vinci paintings, with scarcely a sideways glance on their way to grab a ‘selfie’ with the Mona Lisa!

Images used with thanks from the Wikimedia Commons